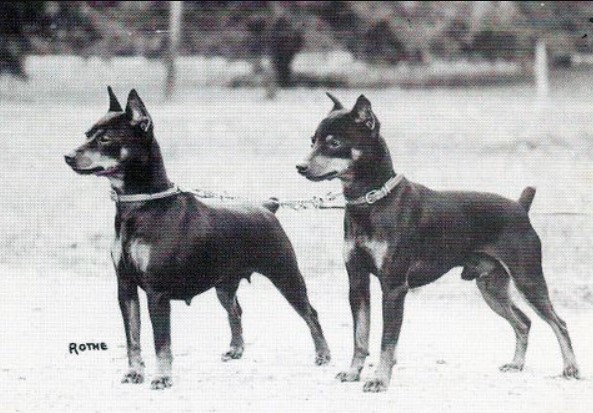 The ancestors of the Pinschers existed in Central Europe and, in particular, Germany, already in the early Middle Ages. From the most ancient historical information, mentions of the Polish chronicler Galley Anonim, dating back to the middle of the 11th century, have come down to us, that at the court of King Boleslav the Bold of Poland, among other dogs, Czech warriors (rat catchers) were kept, a breed that is undoubtedly related to German Pinschers.

Perhaps the history of the Pinschers dates back to much more ancient times than the history of the Germanic tribes, which began its countdown from the 4th century. BC. There is a hypothesis that the primitive dogs Canis familiaris palustris (the so-called small peat dog) were the distant ancestors of the medieval dogs that served as the prototype for the Pinschers and Schnauzers. Their remains were discovered in the second half of the 19th century. by the German scientist B. Studer and the Swiss zoologist and paleontologist of German origin L. Rüthimeyer in Northern Europe. The age of these finds dates back to approximately three millennia BC. It is believed that Canis familiaris palustris gave rise to the development of such breed groups as Terriers and Spitz, which once again proves the similarity of Pinschers and Terriers not only in their utilitarian use but also their possible relationship, albeit very, very distant.

The ancestors of the Pinschers in Germany in the Middle Ages performed purely utilitarian functions. Their main task, like the British Terriers, was the extermination of rodents, in which they succeeded a lot. Therefore, they were often called rattenfanger (German ratte – rat, fanger – catcher). They were both skillful rat-catchers, and vigilant watchmen in stables and in rural houses, and irreplaceable companions of their masters, and playmates for their children. At that time, dogs, who lived mostly with the rural population, were valued primarily for their working qualities.

The least attention was paid to the exterior of the dogs. Therefore, the distant ancestors of the Pinschers were very diverse and did not differ in the beauty and purity of lines. A clear description of the exterior of these dogs has not come down to our times, perhaps because of their diversity, but the common features characteristic of the ancestors of modern Pinschers can still be listed. Strong dogs of medium height (approximately 45-50 cm), with very powerful jaws and an impeccable dental system, dry, but muscular, rough-haired, or smooth-haired. 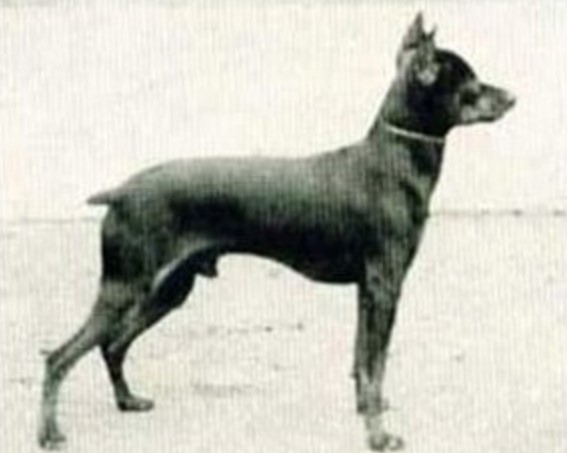 Their entire appearance was subject to strict functionality. These dogs could successfully exterminate rodents in the stables and in the rural houses of their owners, which requires tremendous dexterity, agility, and speed of reaction. They coped no worse with the role of a watchman, being the first to warn of the appearance of strangers near, which requires a remarkable hearing, sensitivity, and attention.

Selection not only for working qualities but also for the exterior, aimed at consolidating the distinctive breed traits, began approximately from the middle of the 19th century. The first exhibition at which the Pinschers have exhibited dates back to 1878, and it took place in Germany, in Hanover. The first Breed Standard was created in 1880 by Richard Strebel (1861-1940, artist, breeder, and expert, author of the classic “German dogs and their use”). In 1895, on March 3, the Pincher Club was founded in Cologne, with Joseph Bertha becoming its president. The main task of this club was to distinguish between different Pinschers into independent breeds: in any case, smooth-haired and wire-haired Pinschers were already clearly distinguished. Also tried to select dogs with a straight topline and a long head. The most active lovers worked, so this breed began to improve rapidly. 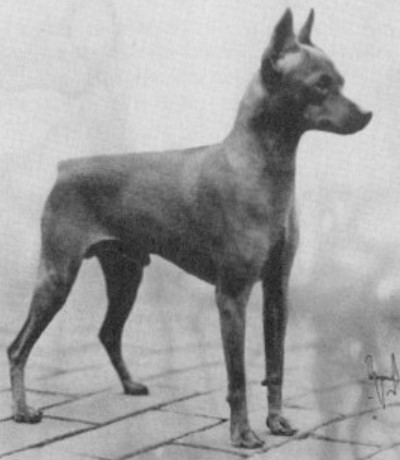 At the beginning of the twentieth century, it was very often still possible to meet pinschers of pepper and salt color, some of the dogs had a black and tan color, and red individuals were much less common. According to the Strebel standard, the Reh-Pinscher, once the most common, was not allowed to breed in order to give way to black and tan dogs. But Richard Strebel and, in turn, Josef Berta, nevertheless decided to recognize the red-brown (deer) color of the Pinscher. Bertha even wrote about this: “I think the breed is characterized by a red solid color and red with a dark bloom. Most of the Pinschers were yellowish-red and grayish-red when they did not yet carry the blood of English Terriers.”  Thus, the black and tan color, apparently, appeared in the Pinschers as a result of the infusion of Terrier blood. Doubts about the “purebreds” of the Pinschers did not contribute to the popularization of the breed, especially since they performed the same tasks with the Terriers. The Pinschers were considered “ordinary” dogs: only 25 medium-sized smooth-haired Pinschers were recorded in Germany between the two wars. In 1958, Giant Schnauzer breeder Werner Jung decided to revive the Medium Pinscher. He chose the path of Swiss dog breeder Jean Pfister, who successfully bred Pinschers from the 1880s, using pepper and salt Schnauzers as a base. Jung collected old-breed dogs in the Thuringian region.

The Miniature Pinscher was more fortunate because since the beginning of the twentieth century it has become a favorite companion breed among the townspeople. At that time, the breeder Ernest Kniss from Leipzig became famous. In the period 1900-1920, the Miniature Pinscher enters the United States, where it becomes one of the first German breeds known there. In England, Pinschers appeared only in 1938. The Second World War caused great damage to dog breeding in Germany. In France, Pinschers have appeared since the first exhibition in 1863. The French Studbook has been maintained since 1885; the first Pinscher was recorded in it under the name “smooth-haired stable terrier”. He was a variegated color with a white spot on the chest. In 1905, the first Miniature Pinscher was registered as the “Smooth-haired German Terrier”. Breed lovers Menan de Corr and Baron Wattville founded the French Pinscher Club in 1928. After the Second World War, it was in Alsace that the breeding of the breed was resumed. Since the 1950s, the French nursery Jean-Marie Lecuti has made a great contribution to the development of medium and miniature smooth-haired Pinschers, which laid the foundation for modern breeding. How to Feed a Miniature Pinscher?

You are a very intelligent individual!

Admiring the dedication you put into your website and detailed information you provide. It's awesome to come across a blog…

Shara Mcclaney - How to Feed a French Bulldog?

Hi my family member! I want to say that this post is amazing, nice written and come with approximately all…

I found this article very helpful